Section 4 (3) (d) of the NAC, Act No.56 of 1997 stipulates that, any member of the public may object in writing to the nomination of any person.

Below are 22 short list of names out of an interview process which took place on 1-3 December 2020. These names are presented to the Minister of Sport, Arts and Culture by the appointed Independent Panel which conducted the interviews for consideration of new NAC Council.

Anyone wishing to comment/object may do so by submitting the following:

Section 4 (3) (c) of the NAC Act, Act No.56 of 1997 stipulate that, an independent panel appointed by the Minister shall compile a shortlist of no more than 22 names from public nominations after interviewing a nominee in public.

The Interviews will be taking place from 01 December to 03 December 2020 VIRTUALLY on Microsoft Teams Platform with details to be published to interested observers.

Anyone wishes to observe the interview process may submit the following:

Anyone wishes to comment may do so by submitting the following:

The Appointment of a Security Company to provide 24 hour physical security at the Nelson Mandela Prison House at the Drakenstein Correctional Services Prison, Paarl, for a period of 12 months.

About the employment stimulus programme

This call is made as part of implementing the national presidential employment stimulus programme for a period ending 31 March 2021. Successful candidates will assist the South African Heritage Resources Agency (SAHRA) with the national audit survey of monuments, memorials, and statues project as mandated by the Department of Sport, Arts and Culture.

Source: South African Heritage Resource Agency, an Agency of the Department of Sport, Arts and Culture

DSAC’S Presidential Employment Stimulus Program – “ Banking with Art – Connecting Lives”
04 Nov 2020
The ArtbankSA in partnership with the Visual Arts Network of South Africa (VANSA) invites visual arts organisations, galleries and individual mentors operating in the visual arts sector in all Provinces to submit their expression of interest to host the 2020/21 Job Placement Program.
VANSA is in the process of rolling out a series of job placement as a program directed at emerging artists for the period of 2020/21. The program is aimed at enabling arts organisations, institutions, businesses or professional individuals to host an emerging artist.
The qualifying selection criteria for the artist to be placed should vary from Matric, TVET college qualification, university qualification and/or should have been practicing as an emerging artist for more than a year.
The monthly salary will be R5 700 for the candidate.
PROGRAM CONTENT
DSAC’S Presidential Employment Stimulus Program - “ Banking with Art – Connecting Lives”
04 Nov 2020 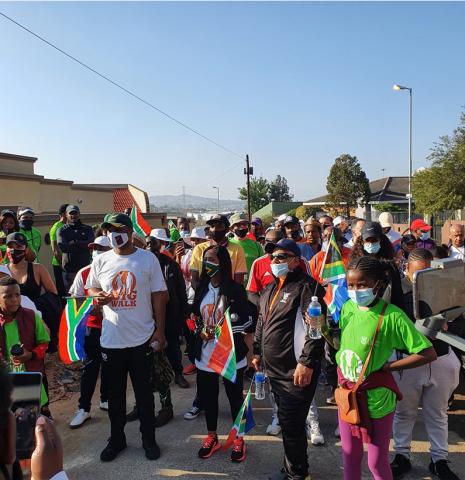 The downscaled event as per Minister Nathi Mthethwa and Gauteng MEC Mbali Hlophe request was attended by members of the creative industry and sport Legends and personalities.