HOW AND WHEN TO APPLY

The Department of Sport, Arts and Culture is an equal opportunity affirmative action employer. It is our intention to promote representivity in the Public Service through the filling of posts and we reserve the right not to fill a position. Persons whose transfer/promotion/appointment will promote representatively will therefore receive preference. An indication in this regard will expedite the processing of applications.

The Use of Official Languages Act, 2012 (Act No. 12 of 2012), among other things, aims at promoting the equitable use of the 11 South African official languages, in facilitating access to government services, knowledge and information and ensuring redress for the previously marginalised official languages.

This Act implies increased demand on language services and properly qualified language practitioners are needed to meet this demand. The Department of Sport, Arts and Culture, therefore, is offering bursaries for students to pursue undergraduate and postgraduate studies in any three (3) of the following areas of study:

Disaster Management Act: Directions: Measures to address, prevent and combat the spread of Coronavirus COVID-19 in the Sports, Arts and Culture: Amendment
06 Aug 2020

Disaster Management Act: Directions: Measures to address, prevent and combat the spread of Coronavirus COVID-19 in the Sports, Arts and Culture: Amendment

This year’s dialogue is hosted under the theme, “Generation Equality Realising Women’s Rights for an Equal Future.” 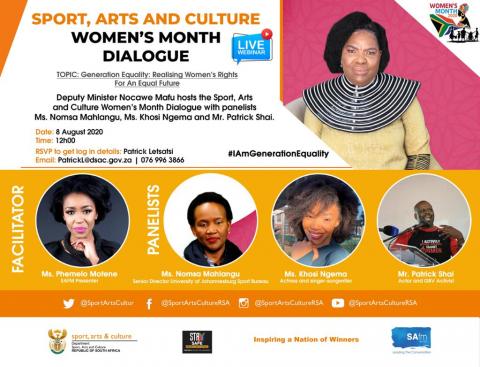 Hosting this dialogue, Dep Minister Mafu will engage with 3 panelists who will form part of this dialogue which will be facilitated by SAFM's Phemelo Motene. 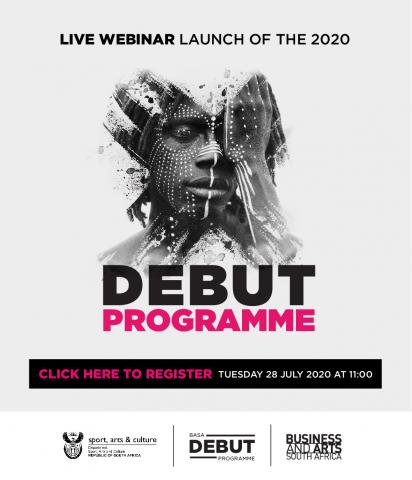 Following a hugely impactful first iteration of the Debut Programme, which was launched by the Honourable Minister Nkosinathi E. Mthethwa of Sport, Arts and Culture (DSAC) in 2017, Business and Arts South Africa (BASA) is calling for applications for the next round of the Programme.

On 6 July 2020, the amended Directions for Sport, Arts and Culture under the Disaster Management Act No. 57 of 2002 were gazetted.

The published Directions allows sport, arts and cultural events to resume subject to compliance with measures to prevent and combat the spread of COVID–19 by—

(i) allowing non–contact sport to resume training and matches

2020 Invitation to South African Artists to Submit Artwork for consideration
25 Jun 2020
Deadline: 3 July 2020
South African artists are invited to apply for their contemporary artwork to be considered for acquisition by the Art Bank of South Africa (ArtbankSA). The ArtbankSA annually considers acquiring special pieces of art for its own growing collection.