Section 6 (2) (d) of the NFVF Act, Act No.73 of 1997 stipulate that, any member of the public may object in writing to the nomination of any person.

Anyone wishes to comment may do so by submitting the following:

Call for Proposals: US Ambassadors Fund for Cultural Preservation
14 Nov 2018
Program Description The Public Affairs Section (PAS) of the Embassy of the United States of America in South Africa invites interested non-profit organizations, public international organizations, and private, public, or state institutions of higher education in South Africa and the United States to submit abstracts for Ambassador’s Fund for Cultural Preservation projects in accordance with the specifications outlined below. Please review all information in this announcement prior to submitting applications or questions. The Department of State established the Ambassador’s Fund for Cultural preservation (AFCP) at the request of the Congress in Conference Report 106-1005 accompanying H.R. 4942 (October 26, 2000). The projects recommended for funding under this program shall advance U.S. foreign policy goals and demonstrate American leadership in the preservation and protection of cultural heritage in support of prosperity and stability around the world. Funding Areas
The Department of Arts and Culture hosts Social Cohesion Intergenerational Dialogue
24 Oct 2018
24 October 2018 The Department of Arts and Culture hosts Social Cohesion Intergenerational Dialogue Department of Arts and Culture in partnership with Novalis Ubuntu Institute will host a Social Cohesion Intergenerational Dialogue in contribution towards Nelson Mandela & Mama Albertina Sisulu Centenary Year, which will take place on the 25th-26th October 2018. The Social Cohesion Dialogue will foster unity and cohesion through the unique way to share stories and dialogue to birth a new day.
Call for nominations for persons to serve on the board of the Pan South African Language Board (PanSALB)
01 Oct 2018

On behalf of the Minister of Arts and Culture and the Portfolio Committee on Arts and Culture, the ad-hoc committee appointed in terms of section 5(3)(a) of the Act hereby calls on members of the language fraternity and the general public to nominate persons to serve as members of the PanSALB Board for a term of five years.

The 2018 National Book Week is brought to you by the Department of Arts and Culture and South African Book Development Council and it  programme will run from 3 to 9 September and will be celebrated in all nine provinces.

The theme for this year’s event is #OURSTORIES, which is intended to highlight not only the fact that storytelling is deeply ingrained in African culture, but that South Africans can  and should  be the authors of their own stories.

The primary aims of the National Book Week is to:

How to Detect  Fraud

The fight back by government against fraud and corruption is visible and is gaining momentum.  Each of us on a daily sees or hears something that is untoward within our midst. Once you hear of maladministration do you keep it yourself or do you report it to the respective units that are dedicated to report fraud allegations. 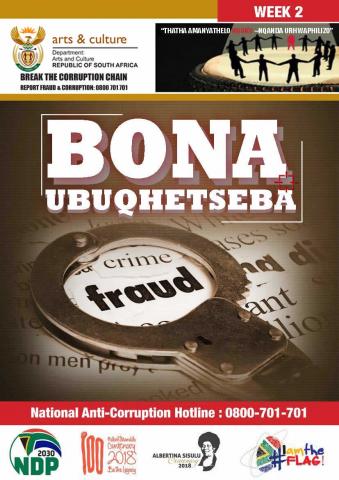 For you to be able to detect corruption or fraud, the first step is to know its characteristics:

On 09 August 2018, the nation will pause and remember the class of 1956, particularly at the National Women’s Day commemoration, at which the President of the Republic, His Excellency, Mr Cyril Matamela Ramaphosa, will deliver the main address in honour of the role played by South Africa’s women.