Known in South Africa as the Cradle of Humankind, the region of Sterkfontein, Swartkrans, Kromdraai and environs has one of the world's richest concentrations of hominid fossils, evidence of human evolution over the last 3.5-million years.

Found in the provinces of Gauteng Limpopo and the North West, the fossil sites cover a 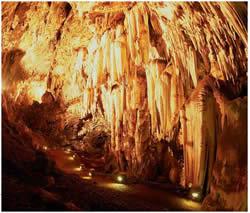 n area of 47 000 hectares. The remains of ancient forms of animals, plants and hominids - our early ancestors and their relatives - are captured in a bed of dolomite deposited 2.5-billion years ago. Although other sites in south and east Africa have similar remains, the Cradle has produced more than 950 hominid fossil specimens.

Sites in the area supply crucial information about members of one of the oldest hominids, the australopithecines - two-footed, small-brained primates that appeared about 5-million years ago.

Excavations and research at the Sterkfontein Caves have so far yielded the nearly complete skeleton of a 3.3-million-year-old australopithecine, as well as about 500 specimens of Australopithecus africanus that date from about 2.8- to 2.6-million years ago.

Other major finds in the area include the most complete skull yet found of Australopithecus africanus, an outstanding example of a female Paranthropus - a more robust australopithecine, also known as Australopithecus robustus - and fossils of an early species of the genus Homo with stone tools, the first evidence of cultural behaviour.

In granting the Cradle World Heritage status for its cultural significance, the World Heritage Committee noted that the sites "throw light on the earliest ancestors of humankind. They constitute a vast reserve of scientific information, the potential of which is enormous."