The Richtersveld Cultural and Botanical Landscape

The Richtersveld Culural and Botanical Landscape is located in South Africa’s northern Namaqualand. The area is a prime example of the most interesting megaecostem in the world and comprises of 160 000 hectares. The dramatic desert scenery shifts from flat sandy plains, to craggy sharp mountains of volcanic rock, to the lush flood plains of the Orange River. This river forms the border between South Africa and neighbouring Namibia.

The landscape is arid and only the hardiest of life forms survive there.Temperatures are extreme, and in summer 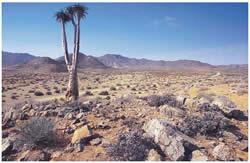 temperatures can reach over 50°C. Rain very seldom falls. The Richtersveld depends on the cold nights producing moisture in the form of heavy dew. The early morning fog is so thick that the locals call it

The area is also home to an impressive 650 plant species. It has the world’s largest diversity of succulents and a number of unusual plants, many of which are found nowhere else on earth. For example, the ‘Halfmensboom’, the ‘half-person tree’, takes the shape of a human. This tree is revered by the indigenous Nama people who inhabit the area, along side others. The Nama people believe that this tree is the embodiment of their ancestors, half human, half plant, mourning for their ancient Namibian home. The Richtersveld is the last place where the traditional way of life of the KhoiKhoi (of whom the Nama are the surviving clan), survives to any great extent today.