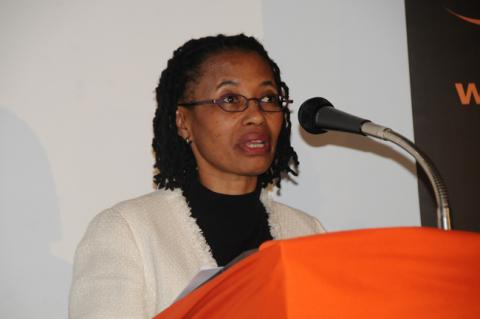 Allow me to begin by welcoming all of you to this important occasion - the official opening of the Hope and Optimism Exhibition at the Ditsong Museum, Pretoria.

We are honoured and privileged to have this special international exhibition curated here and indeed for this collection of 25 Prints to be housed here permanently.  With this donation we also join the other nations in the world that houses small permanent collections of this global exhibition. We are certainly the first in Africa.

One of the lino-prints of the late John Muafangejo, an internationally famous Namibian artist had inspired this global public art project. This lino-print was entitled “Hope and Optimism – Inspite of the Present Difficulties, 1984”

Dr Gerrit Kempeneers, the person behind this project and like-minded colleagues supported by UNESCO and leading cultural institutions around the world put out a call for graphic prints and collected submissions from close to one hundred international artists. In the spirit of Muafangejo, the project aims to document the current hopes and aspirations of each country in the last decade. Hope and Optimism was also used at the two Wembley Concerts of 1988 and 1990 as a 70th birthday tribute to Tata Nelson Mandela. As the concerts were beamed world-wide, millions of people saw and came to recognise Muafangejo’s work as symbolizing the hope and optimism for southern Africa that they all shared.  Today as Tata Mandela approaches his 95th birthday with a recurring lung infection, we remain concerned about this international icon’s health. This well-loved national leader  has contributed immensely to our country and the world.

Hope and Optimism Art Exhibition has no geographical, political or cultural boundaries and was launched in May 1990.  The exhibition has been seen in Europe, United Kingdom and United States of America and donations of collections of the prints have been made to famous galleries I some of these countries.   Dr. Gerrit Kempeneers has been able to build further bridges for World Peace with this project. He has also made the countries aware of accepting each other’s differences whilst respecting each country’s individuality. There is a belief that art carries a powerful spiritual force that can spread this message around. Through art these artists have communicated a message from their countries. This collection will always be a reminder of the warm support that southern Africa has received from the world, in its struggle to gain democracy.

John Muafangejo was always concerned about the suffering of the people in this part of the world. He studied art at the Lutheran Mission of Rorke’s Drift in northern KwaZulu-Natal from 1967 to 1969. He was a prolific artist and had developed a unique style and became easily recognizable. He became world famous and is considered to be the most popular African artist. His images have a strong narrative quality and he depicted African traditions in many of his works. He often extended the narrative with texts incorporated in his work, often with his own spelling. His lino-prints revealed compact stories of people suffering and their will to overcome their difficulties. He is considered to be the best exponent of this medium internationally.  His work has been collected internationally. John Muafangejo died of a heart attack, at the peak of his career when he was 44 years old in 1987. The Namibian government has set up a John Muafangejo Art Center in Katatura which provides art training and a gallery.

The Department of Arts and Culture has promoted the visual arts amongst all the other art forms.  Last year the Department presented the Visual Arts Indaba to discuss recommendations for the sector. These recommendations will be put into action this year by the appointment of the Visual Arts Task Team and the call for participation form the sector in issues such as Artist Rights and Resale Rights. The Department will once again this year strive to partner with organisations to train more visual arts practitioners in the areas of arts administration and management.

Through the Mzansi Golden Economy (MGE) strategy the Department has supported South African artists to exhibit at the prestigious Venice Biennale this year. The National Arts Festival was appointed to manage South Africa’s exhibition which is titled “Imaginary Fact: Contemporary South African Art and the Archive”.  Many South African artists have been accepted to exhibit at the Venice Biennale.  “It was a conscious decision to have a big group show because it is part of our introduction back into the Venice Biennale,” says Brenton Maart, one of the curators and writers. “The interrogation of a unique combination of colonialism and the added burden of apartheid … South African cultural products are unlike any others, and it’s reflected in this exhibition not only through an astonishing materiality, but also through the conceptual ­concerns of a radically diverse group of contemporary artists and their spectrum of experiences,” continued Maart.  Africa has long been underrepresented at the Biennale. This year only five of the 55 countries participating in the national pavilions are from African countries.

Finally I would like to take this opportunity on behalf of the Government and the people of South Africa to thank Dr Gerrit Kempeneers, the Belgian Government, UNESCO, the many leading cultural institutions, the many artists and all those who helped to make this exhibition and collection possible and for giving us 25 original prints.  Thanks to Dr Anil Sooklal, Deputy Director General: Asia and the Middle East, Department of International Relations and Cooperation, Former SA Ambassador to Belgium.

I would like to end with the words of another icon, Mother Teresa,   "Kind words can be short and easy to speak, but their echoes are truly endless."