The uKhahlamba Drakensberg Park has outstanding natural beauty, Africa's highest mountain range south of Kilimanjaro, and the largest and most concentrated series of rock art paintings in Africa - making it a World Heritage site of both natural and cultural significance.

The park lies in the west of KwaZulu-Natal on the Lesotho border. It is 243 000 hectares in size, stretching 150 kilometres from Royal Natal National Park in the north to Cobham Forest Station in the so 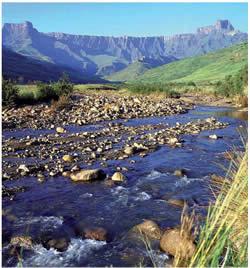 Both the Zulu name uKhahlamba (barrier of spears) and the Afrikaans name Drakensberg (dragon mountains) fit the formidable horizon created by the range.

A massive basaltic cap set on a broad base of sedimentary rocks belonging to the Stormberg series of 150 million years ago, the mountains are South Africa's main watershed.

For more than 4 000 years they were home to the indigenous San people, who created a vast body of rock art - the largest collection in Africa.

Living in the sandstone caves and rock shelters of the Drakensberg's valleys, the San made paintings described by the World Heritage Committee as "world famous and widely considered one of the supreme achievements of humankind … outstanding in quality and diversity of subject and in their depiction of animals and human beings … which throws much light on their way of life and their beliefs".

"The site's diversity of habitats protects a high level of endemic and globally threatened species, especially birds and plants."