Some 2-billion years ago a meteorite 10 kilometres in diameter hit the earth about 100km southwest of Johannesburg, creating an enormous impact crater. This area, near the town of Vredefort in the Free State, is known as the Vredefort Dome.

The meteorite, larger than Table Mountain, caused a thousand-megaton blast of energy. Th 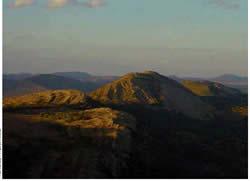 e impact would have vaporised about 70 cubic kilometres of rock - and may have increased the earth's oxygen levels to a degree that made the development of multicellular life possible.

The world has about 130 crater structures of possible impact origin. The Vredefort Dome is among the top three, and is the oldest and largest clearly visible meteorite impact site in the world.

The original crater, now eroded away, was probably 250 to 300 kilometres in diameter. It was larger than the Sudbury impact structure in Canada, about 200km in diameter.

At 2-billion years old, Vredefort is far older than the Chixculub structure in Mexico which, with an age of 65-million years, is the site of the impact that led to the extinction of the dinosaurs.

Vredefort's original impact scar measures 380km across and consists of three concentric circles of uplifted rock. They were created by the rebound of rock below the impact site when the asteroid hit. Most of these structures have eroded away and are no longer clearly visible.

The inner circle, measuring 180km, is still visible and can be seen in the beautiful range of hills near Parys and Vredefort. It is this area that was named a World Heritage site.