The national flag was designed by a former South African State Herald, Mr Fred Brownell, and was first used on 27 April 1994. The design and colours are a synopsis of principal elements of the country's flag history. Individual colours, or colour combinations represent different meanings for different people and therefore no universal symbolism should be attached to any of the colours.

The central design of the flag, beginning at the flagpost in a 'V' form and flowing into a single horizontal band to the outer edge of the fly, can be interpreted as the convergence of diverse elements within South African society, taking the road ahead in unity. The theme of convergence and unity ties in with the motto Unity is Strength of the previous South African Coat of Arms.

Specific instructions with regard to the use of the national flag can be found in the Government Gazette 22356, Notice 510 of 8 June 2001 [PDF].

When the flag is hoisted on a flagpole, the red band must be the uppermost and the black triangle must be on the side of the pole or hoist. 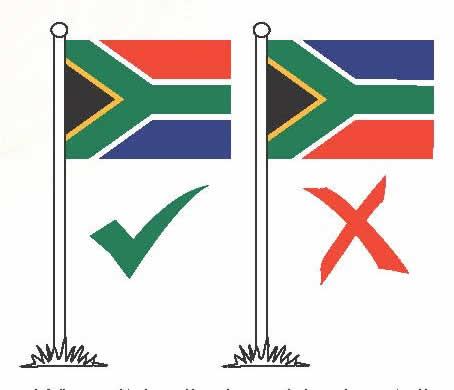