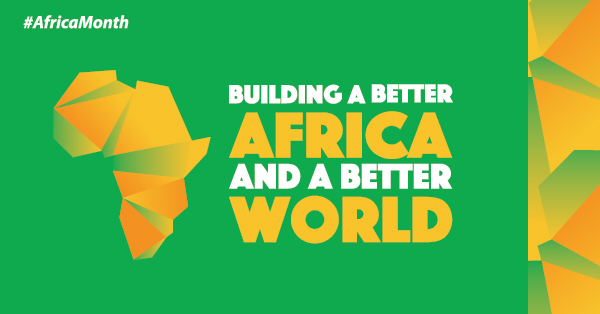 The Minister of Arts and Culture, Mr Nathi Mthethwa invites all of the people in the Republic of South Africa, the rest of the African continent and the African Diaspora to join him in the inaugural Africa Month celebrations.
The theme for Africa Month 2016 is 'Building a better Africa and a better world'.
South Africa recognises itself as an integral part of the African continent. Therefore the country understands its national interest to be intrinsically linked to continental stability, unity and prosperity. Our national interest is therefore defined by the development and upliftment of all African people.
Child Protection Week (CPW) 29 May- 05 June 2016 will be observed under the national theme: “Let Us All Protect Children to Move South Africa Forward”
30 May 2016

Child Protection Week (May ) is an annual national awareness campaign led by Government through the Department of Social Development, to uphold Government’s commitment to protect and promote children’s rights in partnership with civil society.

The Department of Social Development will launch National Child Protection Week in Braakspruit Farm, Klerksdorp on 29 May 2016.

The theme for the next five years is “Let Us All Protect Children to Move South Africa Forward”. This theme was approved by the NCCPF on 20 August 2015. The theme highlights the significance of everyone’s responsibility of ensuring that all children are protected.

Thank you for being part of the DAC Africa month fashion experience in collaboration with African fashion vibe 2016. Theme “creating a better Africa and better world” Below is the link for show pics..

There was a lot of positive response on the collections seen and I will share with all the next plans.

The National Film and Video Foundation (NFVF), an agency of the Department of Arts and Culture provides film and video-related funding in the broad categories of Education and Training; Development, Production and Marketing and Distribution.

The Venture Capital Fund applications are now open for submission for the period: April 2016 to March 2019. Please pay attention to the funding guidelines and application form.  Interested and eligible institutions and companies are hereby invited to send applications and proposals for possible financial support from the Department.

The voice of those who were believed to be speechless

Anglo Boer War Museum is not just an Afrikaner-museum
21 Oct 2015
Anglo Boer War_AdEveryone should be able to learn about the history of the South African War (Boer War), Parliament were told on Monday,19 October 2015.
The select committee on education and recreation said in a committee report, after a visit to review the Anglo-Boer War Museum in Bloemfontein, that more must be done to make this piece of history part of the school curriculum.
In the report, the Department of Arts and Culture was urged to make sure the museum is classified correctly.
"This will help to stifle perceptions on which it is seen as an exclusive Afrikaner Museum as the trend was among certain population groups in asserting Afrikaner history as their own."
The purpose of the review visit was to assess transformation at the museum.
According to the committee, there is still a perception that the museum is not accessible to everyone.
National Film Video Foundation: Tell Me Sweet Something; A Box Office success
29 Sep 2015
Tell Me Sweet Something tells the story of Moratiwa (Nomzamo Mbatha), an aspiring writer who owns and runs a bookstore in the heart of Johannesburg. The bookstore, like her love life, is not experiencing much success. This all changes when she meets and falls in love with the unlikeliest candidate in the world, Nat (Maps Maponyane), a male model, who has never read a book in his life and is desperate to be loved for his mind not his body. https://www.youtube.com/watch?v=oBMDMXDftnM.
International Translation Day 2015: The changing face of translation and interpreting
15 Sep 2015
International Translation Day (ITD) was launched in 1953 by the International Federation of Translators. It is celebrated worldwide every year on 30 September, the feast day of St Jerome, who is the patron saint of translators. The day presents an opportunity for paying tribute to the work of translators, terminologists, interpreters and language practitioners in general who endeavour to make the world a slightly smaller place by breaking down language barriers and allowing great literature to be enjoyed far more widely. Dedicated events, seminars, workshops, conferences and symposiums are held across the world to celebrate ITD.
The day itself coincides with the feast day of St. Jerome, a Christian scholar and priest who was the first person to translate the Bible into Latin from the original Hebrew, making it accessible to a far wider audience.